GeForce NOW Open for All Waitlist removed, memberships are now available for everyone.

More than 1.2 billion players have made the PC the world’s largest gaming platform, yet only a fraction have a modern PC with the power to play their favorite games.

GeForce NOW lets you use the cloud to join in. It’s the power to play PC games anywhere, on any device — even the billion devices that aren’t game ready. You’re upgrading to a state-of-the-art gaming rig by virtually adding a GeForce graphics card to your PC, Mac, SHIELD or Android phone.

Just like the PC, GeForce NOW is an open platform. It’s powered by our world-class GPU architecture and uses our Game Ready Drivers for the best performance. And, because these are real PC games, GeForce NOW gives you the precision of keyboard and mouse gaming, as well as optimizations for game controllers.

It’s an opportunity for you to connect to the millions of gamers online and join your friends in your favorite PC communities. Most importantly, it instantly connects you to the games you already own on the digital game stores you own them on, or the latest free-to-play game everyone is playing.

Your games, your devices, GeForce power.

Funny thing about gamers. They have games. Lots of them. Our GeForce NOW beta members have large libraries. Often 50 games or more. You shouldn’t have to leave them behind.

That’s why we’re working with existing PC game stores and publishers. With GeForce NOW, you can keep playing the games you already own and continue building libraries from the same stores you already use every day. That’s what it means to be an open platform.

If you buy it, you own it. If you already own it, play it. Your purchases are always yours. 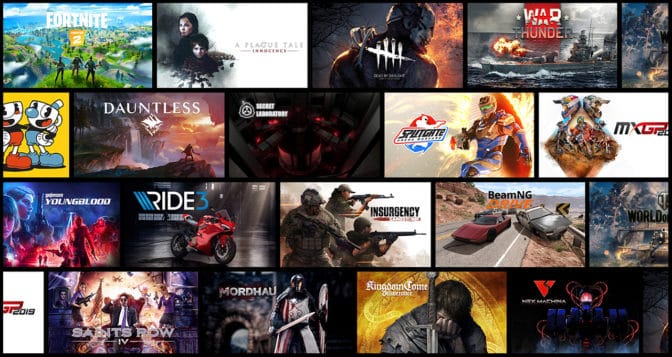 GeForce NOW is the only cloud gaming service with access to a wide range of free-to-play games, more than 30 and growing. In total, there are hundreds of games from more than 50 publishers that, once you own, are available for instant play. All these games are patched automatically in the cloud, so your library is always game ready.

While we continue to grow the library of instantly accessible games, there are also more than 1,000 games that can be played through single-session installs.

Games get added to the service weekly based on member requests, game popularity and publishers’ input. If you don’t see a game that you want to play, let us and the publisher know.

GeForce NOW takes PC gaming and 60+ FPS action where it’s never been before. Underpowered? No problem. Incompatible? No problem. 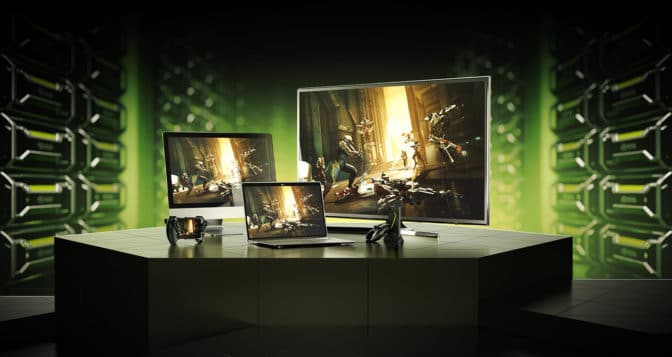 Your old laptop never gamed like this before. That Mac, which for years has seen fewer games published for it or lost compatibility, can now play the latest games. Your rig doesn’t have to move from room to room to game on the largest screen in your house — your TV. And most recently, PC games go with you on the screen you take everywhere: your Android phone.

And later this year we’ll add Chromebooks, giving members yet another screen to play on.

Over 300,000 beta testers have streamed more than 70 million hours of gameplay in 30 countries throughout North America and Europe. GeForce NOW is better because of every second that’s been played. During the beta, over 80 percent of members instantly upgraded from systems without GeForce GPUs to the latest PC graphics.

We’ve reached a point in our journey where we’re ready to remove the waitlist, exit beta and open GeForce NOW up to even more gamers. Members will have the option of a free or premium experience. The free membership provides one-hour sessions with standard access to GeForce NOW servers. There’s no limit to the number of sessions you can play. All GeForce NOW beta members automatically have had their beta accounts converted to this free plan. Simply sign in and continue gaming.

Gamers can also upgrade to a no-wait, longer session-length premium experience. These members will enjoy priority access to GeForce NOW servers ahead of free members and extended session lengths of up to six hours. They’ll also have exclusive access to RTX content on GeForce NOW.

For a limited time, we’re offering the premium experience as a Founders membership. The first three months are free, followed by a discounted rate of $4.99 a month for all of 2020. This special offer is part of our commitment to working with the community that continues to help us improve GeForce NOW.

Both memberships will work across any supported device that you already own. No additional hardware needed.

We’ll continue to launch new features, including today’s introduction of ray tracing. The holy grail of gaming graphics, ray tracing simulates the physical behavior of light to bring real-time, cinematic-quality rendering to even the most visually intense games. Founders members will have instant access to RTX games. GeForce NOW continues to evolve and we’re working every day to improve your service.

Because of You, GeForce NOW is ON

We couldn’t — and wouldn’t — be here without the beta members who have helped guide us on our journey. From Mac to PC to SHIELD and then to mobile, every ounce of feedback has left an impression on GeForce NOW. Thank you.

And to everyone who wants the power of PC gaming that 200 million GeForce gamers already know and love, welcome to GeForce NOW. More power, more people — game on.