NVIDIA: We are bringing Turing technology to next gen of GeForce RTX

Gaming is thriving. An entire generation is growing up gaming. Two billion gamers and counting. They play at home, on the go and on multiple platforms, and by far the most vibrant, innovative and open is the PC.

The forces driving PC gaming are staggering in scale.

Take the battle royale genre — think Fortnite, Call of Duty Blackout and PlayerUnknown’s Battlegrounds. It’s had a meteoric rise from zero to a player base of 300 million across platforms in just two years, bringing many new players to PC gaming and GeForce.

And PC gamers are the most demanding. Developers continue to produce more visually rich games. Over the past five years, the GPU performance required to play the latest games at 1080p, 60 FPS has increased 3x. And the most desired gaming monitors have doubled in resolution. The motivation for the installed base of gamers to upgrade is real — gamers choosing higher-end GPUs have increased 2.5x since 2013.

At CES we announced we’re bringing our revolutionary Turing technology to tens of millions of gamers with the new GeForce RTX 2060, priced at just $349, along with impossibly sleek new Max-Q laptops to drive today’s fastest growing gaming platform.

The RTX 2060 delivers the performance and value for the “sweet spot” of GeForce gaming. The GeForce RTX 2060 follows a line of the most popular GPUs on Steam: GeForce GTX 960, 970 and 1060. This class of GPU represents one-third of our gaming installed base. With Turing’s advanced streaming multiprocessors, the RTX 2060 delivers up to 2x the performance of the GTX 1060 on today’s games.

But Turing is much more than raw performance. It represents the biggest architectural leap forward in over a decade. With a new hybrid rendering approach, Turing fuses rasterization, real-time ray tracing and AI for incredible realism in PC games. GeForce RTX paves the way for the future of PC gaming.

The gaming industry has come together to start delivering the future of PC gaming.

Microsoft released an extension to DirectX called DirectX Raytracing (DXR) last November, laying the foundation for accelerated ray tracing and giving developers access to the capabilities of the RTX GPUs. 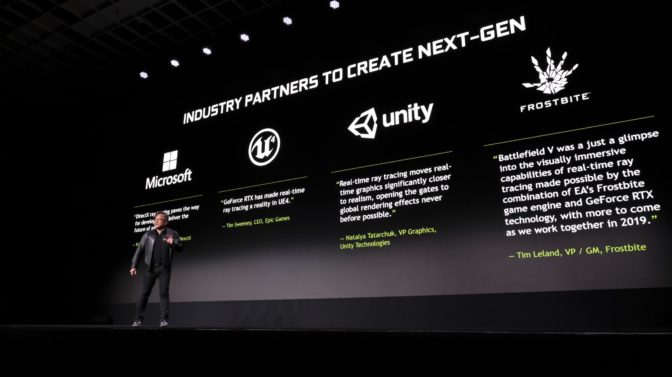 At CES, we announced DLSS will be coming to Battlefield V. While it has been noted that the beauty of ray tracing can come at the cost of some performance, this is overcome with the integration of DLSS. With the addition of DLSS,  Battlefield V is able to run “RTX ON” (ray tracing + DLSS)  and maintain the same frame rate as non-ray tracing (RTX OFF) at 1440p on an RTX 2060. 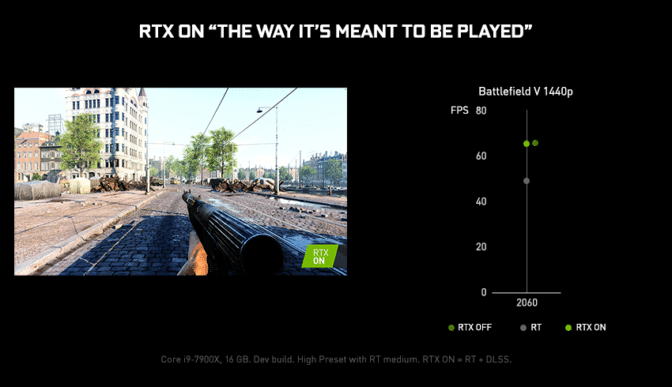 We also announced DLSS is coming to blockbuster BioWare (EA) title Anthem, which releases in February. And there are dozens of other current and upcoming titles in the pipeline.

Demand for gaming laptops has grown dramatically in recent years, driven by their transformation from a compromised platform to a full gaming experience, thanks to Pascal — and now Turing — GPUs and NVIDIA’s Max-Q laptop design approach.

RTX Is for Creators

GeForce RTX desktops and laptops are great news not just for gamers but for the world’s creator community, whose numbers exceed 20 million. Whether you create complex 3D animations or edit high-resolution videos, you’ll be able to experience a new level of productivity on GeForce RTX.

This week at CES, we announced collaborations with Autodesk and RED for 3D animation and 8K video editing. We also demonstrated how we’re bringing hardware-accelerated ray tracing, AI-enhanced graphics and advanced video processing to our new thin and light GeForce RTX Max-Q laptops.

We also announced a major upgrade to OBS, the standard tool for game broadcasters. With GeForce RTX, any game stream can achieve pro quality from a single gaming rig, or even broadcast on the go from thin and light RTX Max-Q laptops.

Finally, we announced we’re working with HTC to push the state of the art in virtual reality with foveated rendering using RTX GPUs and HTC’s new Vive Pro Eye headset.

RTX Is the Next Generation of Gaming — and It’s ON!

The RTX 2060, priced at just $349, together with a record 40+ RTX gaming laptops open up the next generation of PC gaming to tens of millions of gamers.

The next generation of gaming is here.