How Dragon Quest XI came to life with Unreal Engine 4 Dragon Quest XI: Echoes of an Elusive Age is the biggest and most beautiful game in the long-running, esteemed JRPG series. Its vibrant colors and cel-shaded visuals draw you into an epic, anime-looking world that appeals to series newcomers as much as it does to long-time fans.

To find out more about the project, we connected with Dragon Quest XI Director Takeshi Uchikawa to discuss how he and his team at Square Enix were able to bring the acclaimed title to life using Unreal Engine 4.

In Dragon Quest XI, you take control of a pre-destined, hunted hero who must embark on a perilous journey across the fantastical world of Erdrea. Along the way, you encounter a colorful cast of characters who help you on your adventure. To achieve the wondrous look of the game, Square Enix leveraged the power of UE4 and used character designs by legendary artist Akira Toriyama, who is best known for creating Dragon Ball. The combination resulted in cel-shaded characters that look like they’ve been meticulously crafted with love; even low-level enemy minions are super charming.

To ensure that the universe looked cohesive throughout, several teams from different departments would continually meet and iterate on the design. "It took us quite some time to achieve the final look, but we all worked towards the goal of blending Mr. Akira Toriyama’s characters and the realistic backgrounds together,” Uchikawa stated, adding, “So the character team, background team, and the technical team came together to repeatedly scrap and build­ - ultimately succeeded in creating this unique look, which has such a distinct flair." 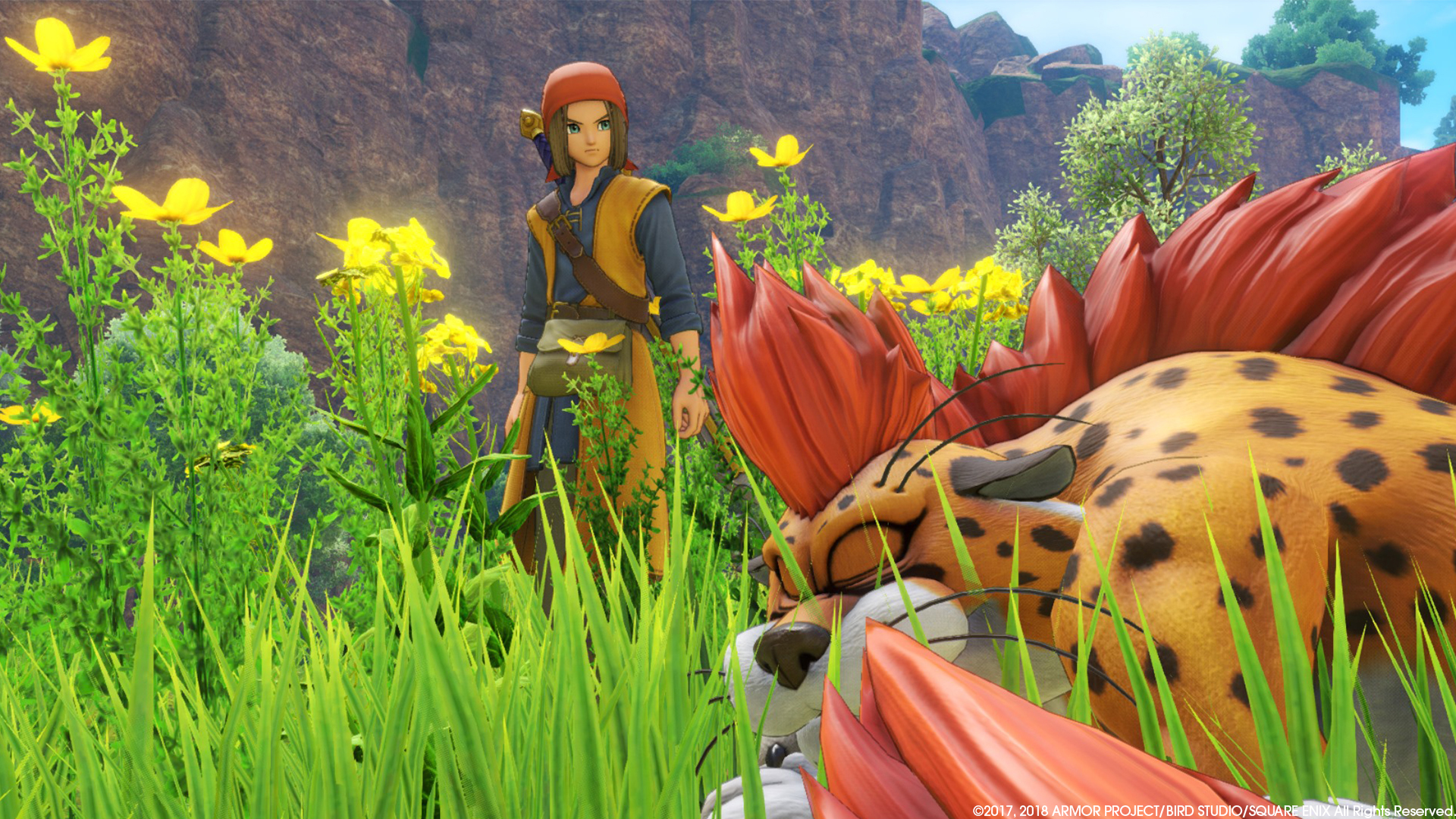 With the 11th installment, it's the first numbered game in the series to use a non bespoke engine. One of the reasons Square Enix chose Unreal Engine 4 was due to the engine's advanced graphical pedigree. The team also selected UE4 because they knew it had a long-running track record of working well across a wide variety of platforms. This is especially helpful in Dragon Quest XI's case since it's available across PC, PS4, is optimized to take advantage of the PS4 Pro, and is coming to the Nintendo Switch.

Another huge benefit that the team got out of using Unreal Engine 4 was the ability to quickly iterate, which is a vital asset to any game’s development. "The rapid pace at which we were able to update on the UE4 editor was very helpful when we were making adjustments to the map design," Uchikawa stated, adding, "The fact that we could confirm differences right away as we were deciding on the direction led to greater efficiency in development."

This rapid iteration time is partially what allowed Square Enix to develop such a large game. Not only does Dragon Quest XI’s fantastical world sprawl across wide expanses that include beaches, caverns, and towns, but it offers a sense of verticality and explorability with platforming mechanics that no Dragon Quest game has been able to offer before. With UE4, level designers could build and quickly get feedback on their newly prototyped environments. “We were able to edit shapes in the editor and test it out right away. Thus, whenever we got lost in the terrain during our test play, we could revise it and reflect the changes in the following day’s build,“ Uchikawa stated. Square Enix also knew they wanted to incorporate a day-to-night cycle within the game and were surprised how easy it was to change the time of day considering they just needed to tweak numerical values within the engine. 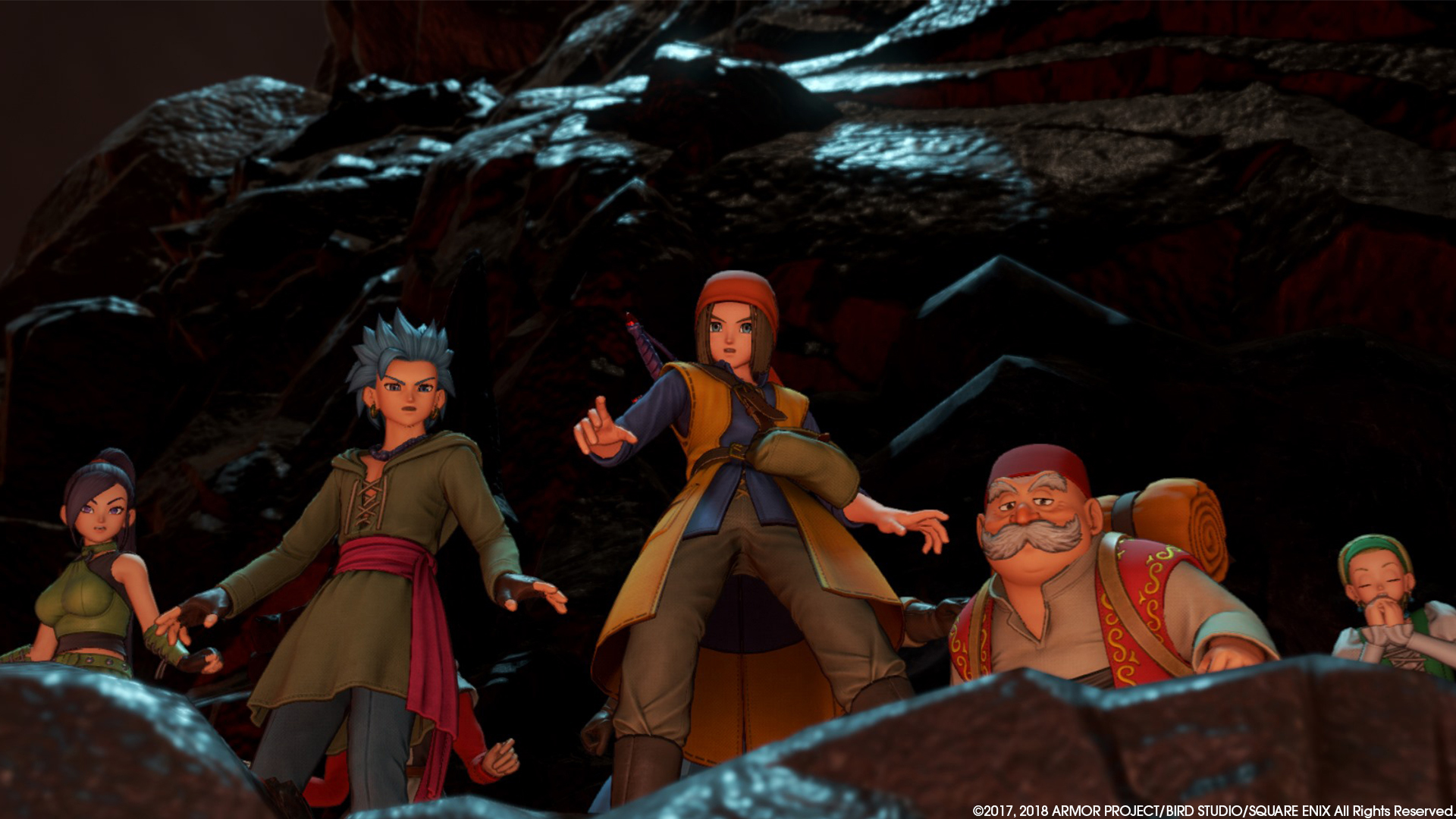 Further breathing life into the world, Square Enix thoroughly localized the dialogue for English-speaking audiences and enlisted the help of top-notch voice actors who provided numerous accents to immerse players into the experience. To bolster the quality of its western release, the developer also re-animated the lip-syncing. In regards to animations, the plentiful cinematics were all constructed using UE4's native cutscene and effect tools. A symphonic/MIDI musical score by famed Dragon Quest composer Koichi Sugiyama wraps up the presentation.

With so much passion going into the world, character designs, and graphics, one of the driving forces for the team was to encourage all players to see the game through to the end. Considering how few players actually finish titles to completion these days, coupled with how meaty Dragon Quest XI is, that's no small task.

To set out to achieve this, Square Enix followed three game design tenants laid out by original Dragon Quest creator Yuji Horii. These include creating an "ease of understanding," "a sense of reassurance," and the drive to facilitate an "exciting adventure" throughout the experience. Uchikawa elaborated on these principles as it pertained to Dragon Quest XI, "For the story, we aimed to provide a pleasant surprise to our players in the way the story unfolded. For the exploration, we made sure the player would not become lost from the main path, but also prepared a satisfying reward if, and when, they did want to sidetrack. As for the combat, our goal was to avoid requiring players to grind, while still allowing them to sense they were progressing." Uchikawa added that the team put their heart and soul into the ending, stating, "It is naturally something we put in our best efforts into it. Therefore, I would love for everyone to play until the very end!" 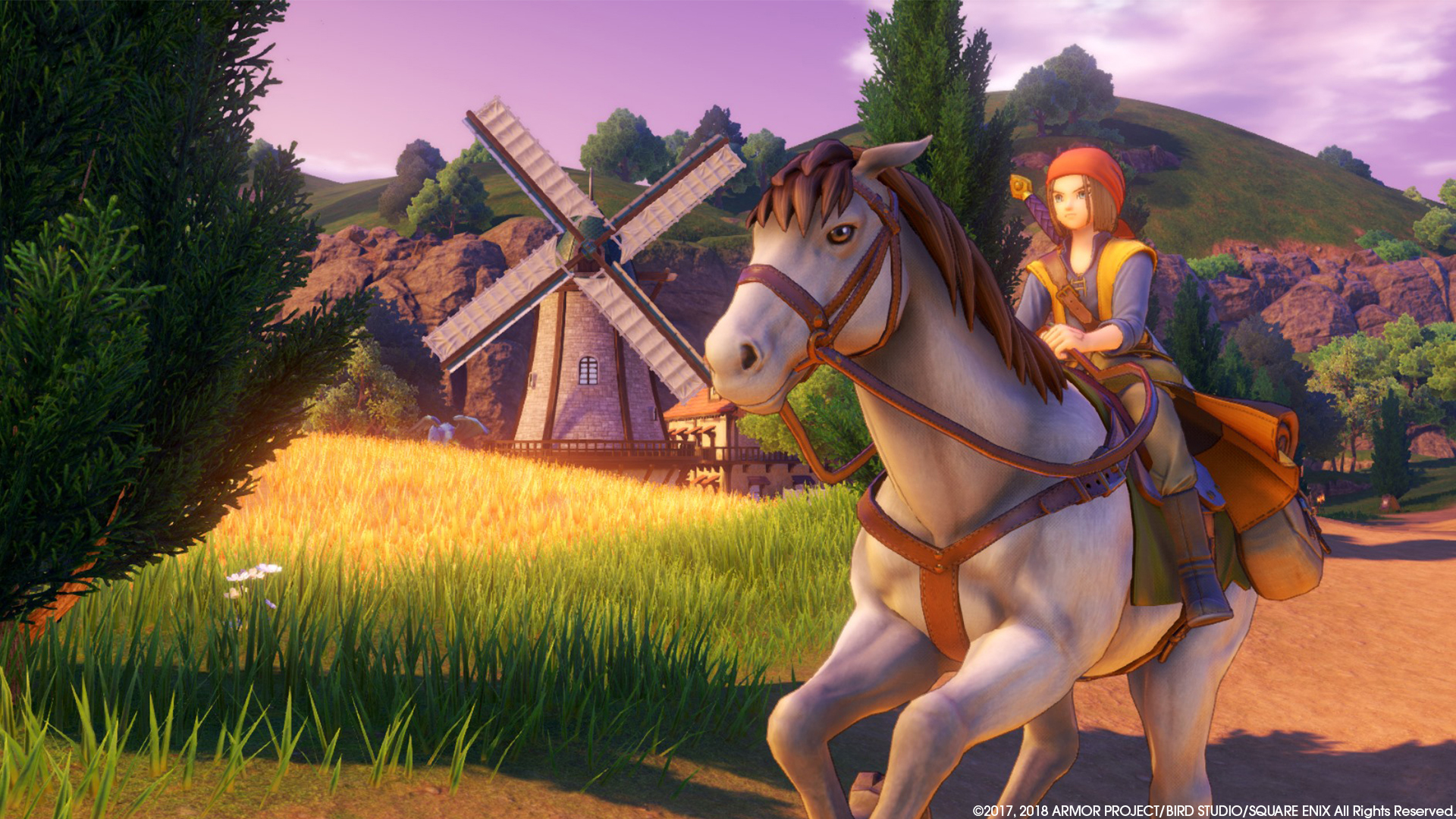 In building a game as massive as Dragon Quest XI, Square Enix encountered performance hurdles relating to memory management and load times. The developer worked with Epic to tweak the engine to better handle garbage collection, and according to Uchikawa, “These improvements have been merged in the latest version of UE4.” As a result of these efforts, Dragon Quest XI not only runs well, but features minimal load times, and supports 4K resolution coupled with vast draw distances that span as far as the eye can see.

Dragon Quest XI marks the 30-year anniversary of the series, and with it, Director Takeshi Uchikawa set out to create a "beautiful and brand new beginning" that felt "new and yet nostalgic." The developer wanted to capture the essence of the franchise with its classic turn-based combat, but tailor it for veterans of the series and newcomers alike while producing state-of-the-art graphics. “We wanted to create a game where everyone, even if they didn’t understand the nods, would think ‘this is fun!’,” Takeshi stated. Considering the game recently released to rave reviews across the western world, the fruits of their labor certainly paid off. To find out more about Dragon Quest XI, head over to DQ11.com.

If you're interested in creating your own game, you can download and explore Unreal Engine 4.20 for free today.