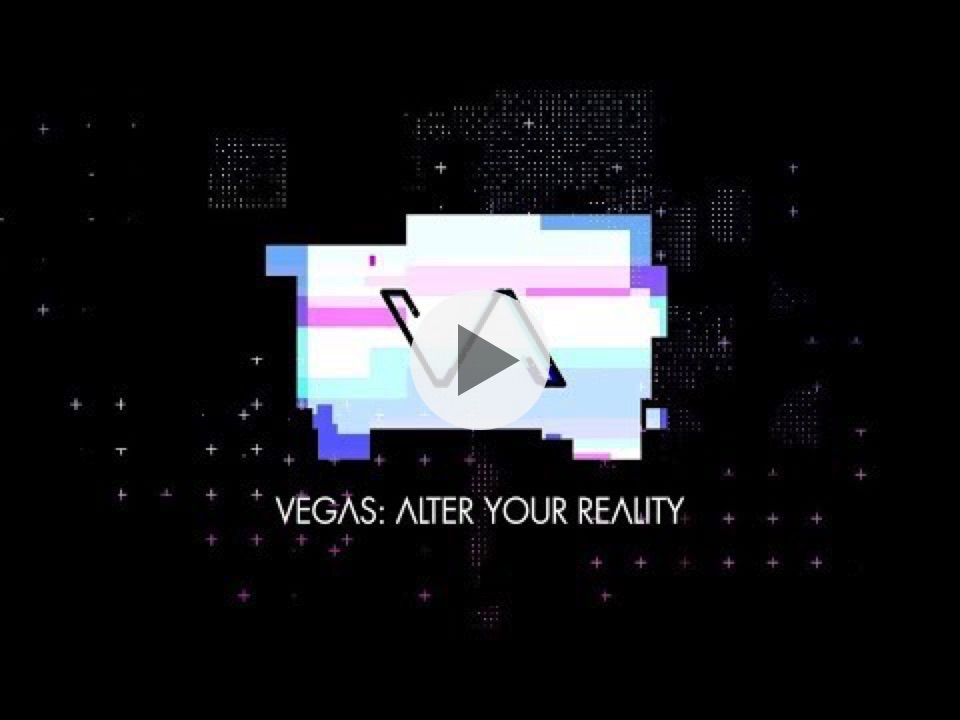 The virtual art collection debuted last December at the prestigious annual Art Week and Art Basel festival in Miami and can be experienced now on the Vegas VR app. The activation is presently scheduled at select locations around the world.
Fragomeni and Cochrane have been at the forefront of VR production since 2013, and together have more than 30 years experience in live action, design, animation, post-production and high-end visual effects. Fragomeni has extensive experience in film, TV, music videos, commercials, interactive and emerging media - including feature film work on “Pacific Rim,” “Terminator Salvation” and “Pirates of the Caribbean.” Cochrane, has directed top immersive experiences for brands such as Google, Intel, and USA Today.
MAXON recently caught up with Fragomeni and Cochrane to speak about the 3D creative experience in producing virtual reality content for this massive production.
MAXON: According to the LVCVA press materials, ‘Vegas: Alter Your Reality” is described as a “…creative interpretation of the Las Vegas experience, direct from the minds of five distinguished, international artists. Transformed into vibrant and immersive content pieces, their personal narratives are given the ultimate presentation as a virtual reality art collection...” At what point were you and the Sunset West Media team brought into the project?
JF: It all began in early 2017 with a call from Vaitari Anderson, Executive Producer, and Creative Director, Dwayne Grech at R+R Partners, for the VAYR project. From the start, we knew that to bring this to experience to its full potential meant we had to break away from the traditional client/vendor paradigm. This was a not only a collaboration but a partnership where art meets technology.
MAXON: You commented that 360º production is still relatively new, with very few projects of any scale attempting the amount and level of work that this project required. What made this project so unique?
AC: Most 360º content is either a tie-in with an entertainment property or a product – marketing has driven most of this emerging medium thus far. This project is rare in that there was no mandate other than for each of the artists to create. R+R Partners and the LVCVA were uniformly focused on maintaining the purity of this goal. In every way, this is an art installation project, with Las Vegas as its patron.
MAXON: What were your pre-production discussions like on VAYR? More specifically, how did your CG animation team work with each of the artists in bringing their ideas and impressions into the virtual world?
JF: Our team of CG design and animation experts worked directly with each artist to guide them through an asset creation phase where they made individual images and style frames in 2D for our team to use as the basis for our 3D work in Cinema 4D.
Each two-to-three-minute immersive video is a direct translation of the artist’s work into VR, with assets they created and that our production team converted into 3D using Cinema 4D and CV-ArtSmart, then animated and rendered into omnidirectional stereo using CV-VR Cam.

AC: The process was fluid and involved back and forth discussions and interactive sessions. We worked from production storyboards and artists’ mood boards with references to their 2D animations or in some cases even a 2D file that we could extrude and turn into a 3D asset in Cinema 4D for animation and rendering.
MAXON: What software tools were used in the production pipeline to ensure each artist’s vision of Las Vegas would be interpreted uniquely in VR?
AC:Artistically styling 3D simulations and animations to match a two-dimensional aesthetic in a fully immersive 360º world required a multi-faceted team and a flexible production approach. We used Cinema 4D as our primary tool for rigging, animation, environment creation, particle effects, and lighting, with OTOY Octane for rendering. Adobe After Effects and Autodesk Fusion 360 were used to composite and Mettle's Skybox plugins used to create content and to make WIP edits in Adobe Premiere so that we could check progress in the VR headsets.

MAXON: Tell us about the 3D VR workflow challenges your team faced creating such a huge volume of immersive content for VAYR.
JF: The sheer volume and variety of needs that these five films presented as far as we are aware is unprecedented in 360º animation. Using Cinema 4D, with the addition of complex simulations from SideFX Houdini and Next Limit RealFlow, we successfully modeled, textured, lit, rigged, simulated, and rendered over 500 2D assets that had to be converted into 3D or wholly created in CG.
AC: We relied on Cinema 4D techniques from pretty much everything we have ever worked on. Converting Signal Noise and Batista’s Adobe Illustrator files would have taken months if not for CV-Artsmart. Making Insa’s desert shatter pushed the MoGraph and Rigid Body systems beyond anything we have ever attempted in Cinema 4D to date. Additionally, we used CV-VR Cam heavily on Batista’s film which proved ideal for realizing his 2D /illustrated style in VR. Beeple is a prolific Cinema 4D power user and his VAYR piece was created almost entirely using the software with Octane as the renderer. Uniquely, he would handoff his scene files to our team to do all final lighting, finishing and rendering. 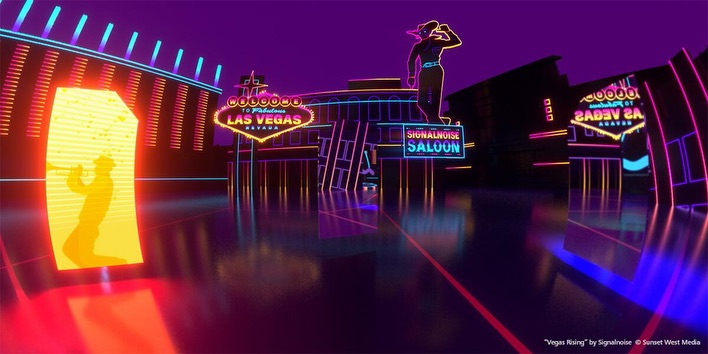 JF: We enjoyed a close technical partnership with Paul Babb and Rick Barrett of the MAXON US team, which helped us confidently process all VAYR shots through Cinema 4D. We needed R&D support and did things that pushed the boundaries without an engineering group on the project. The MAXON team was huge help, being just a phone call or email away to get quick answers to any questions and find solutions to any technical needs, which enabled a very smooth workflow.
MAXON: The VAYR video project’s focus is on individual artists capturing their experience of Las Vegas so that they can be viewed on VR headsets. Were there special considerations in setting up the production pipeline?
JF: With a terrific vision of the scope, lending on the experience of building, managing and running post/VFX studios and thorough extensive pre-planning we assembled an entire production facility in just a week.
Every workstation was a quad-GPU beast, a total of 68 Titan XPs boasting a combined 243,712 Cuda cores, with a total capacity of 816,000,000,000,000 floating point operations per second. This gave us the seamless and efficient throughput to handle the demanding amount of data and workload. The team was relatively small given the sheer volume of work – we generated over 2 million frames in the process of creating the final 12.5 minutes of 4K stereo animation.
MAXON: What did you and your team most enjoy about working on the VAYR project?
AC: The creative collaboration between our team, R&R, and the artists was a dream come true, and the initial brief to “just make art” was never abandoned.
JF: This project came down to the creative scope and freedom to make fresh content on a relatively new story platform as we pushed creative and technical limits. We’ve worked with Cinema 4D across hundreds of projects over the years, but this one demanded us to genuinely push it harder than we have ever done before which led to almost daily discoveries of techniques that we’ll be using for years to come.
Sunset West Media credit list:
John Fragomeni – Creative Executive
Andrew Cochrane – Creative Director
Paul Pianezza – Post Producer
Ryan Hitch – Post Producer
Roy Edwards – TD/Pipeline
Ryan Fragomeni – Post Production Assistant
Max Forward - Storyboards
John Robson – Creative Lead
Itzik Roitman – Creative Lead
Liam Ward – Digital Artist
Matt Shadis – Digital Artist
Tyler Heacox – Digital Artist
Lamson To – Digital Artist
Ivan Cruz – Digital Artist
Yates Holey – Digital Artist
Richard DeForno – Animator
Margaret Dost – Modeling
Sophie Kim – Illustrator
Vegas: Alter Your Reality Image Video Resources
Link to the VAYR promo: https://www.visitlasvegas.com/alteryourreality/
Link to indivdual VAYR artist videos:
https://www.youtube.com/watch?v=YxRBVElQyP4&list=PLaoM9Ki92NSyO4hy5bWj1QMEWamF_EKts
All trademarks contained herein are the property of their respective owners.
Tags: Maxon
Sections: Core Partners Program News & Features