New technologies will allow gamers to use VR to travel to stunning new worlds. Or, through augmented reality, to blend those worlds with your own.

At the Adobe Summit in Las Vegas before an audience of more than 10,000 marketing pros and data scientists, Adobe CEO Shantanu Narayen and NVIDIA CEO Jensen Huang spoke Wednesday about how AI and machine learning will unleash wild new possibilities.

In the wide-ranging talk, which highlighted their strategic partnership, Narayen and Huang spoke about how new tools — such as Adobe’s new Sensei AI and machine learning framework — will enhance the work of creative and marketing professionals in a variety of fields.

“You guys are going to create experiences with these tools … that will allow people to create an enormous number of new realities,” Huang told the audience.

Adobe and NVIDIA, of course, have worked together for more than a decade to enable GPU acceleration for a broad set of Adobe’s creative and digital experience products — a history touched on as Huang and Narayen talked about their shared history at the cutting-edge of computer graphics.

More’s coming. Offering a taste of some of the capabilities our just-announced partnership will bring to market, Adobe showed a jaw-dropping live demo that paired NVIDIA’s powerful Ansel photo mode for games with Adobe’s AI capabilities.

Taking the audience to the richly detailed world of “The Witcher 3: The Wild Hunt,” Adobe’s AI was able to describe the aesthetics of a scene and instantly tag thousands of people, objects and animals as a camera panned around the village of Novigrad.

And then, with a simple voice command of “show me the angry man with arms crossed,” it was able to call up an image from the experience.

It’s just one example of how Adobe and NVIDIA’s collaboration promises to speed time to market and improve the performance of Sensei-powered services for Adobe Creative Cloud and Experience Cloud customers and developers.

“This was done by virtue of the fact that you have this open architecture that allows us — and we’re doing the same for our customers — to make this available so that our customers can apply their own data science,” Narayen said. 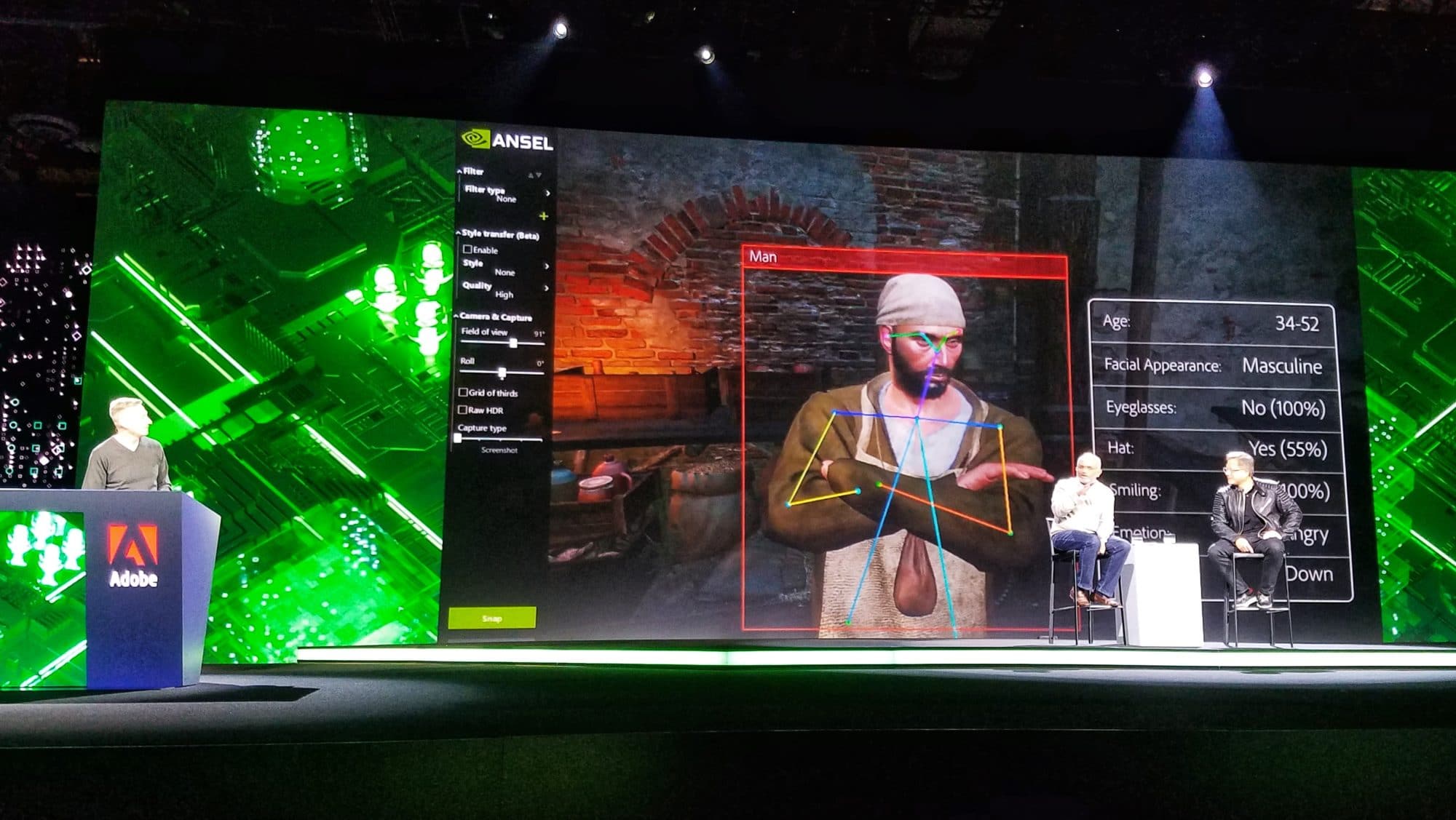 The partnership promises to enhance Sensei-powered features, such as auto lip sync in Adobe Character Animator CC and face-aware editing in Photoshop CC, as well as cloud-based AI and machine learning products and features, such as image analysis for Adobe Stock and Lightroom CC and auto-tagging in Adobe Experience Manager.

Huang, who flew to Las Vegas for Adobe’s event the day after delivering a keynote at NVIDIA’s GPU Technology Conference in Silicon Valley, also spoke about some of the new graphics capabilities NVIDIA is unleashing.

NVIDIA has long sought to create virtual experiences that model the real world. One of the biggest challenges in the field: modeling the physics of how light moves around a scene to deliver the kind of realism — in real time — that now takes moviemakers hundreds of hours to accomplish.

After 10 years of endeavor, NVIDIA earlier this month announced NVIDIA RTX ray-tracing technology, which will allow content creators to use this technique in real time. “It’s just a huge breakthrough,” Huang told Narayen.

How Graphics Led to AI

Simulating physics — key to creating life-like graphics — also led to NVIDIA’s AI and machine learning, Huang said. To do that, NVIDIA has to build capabilities for its technologies that now make its GPUs invaluable for the deep-learning revolution.

Roll Up Your Sleeves

NVIDIA’s march into AI is an example of how successful companies — like Adobe — change over time. “There is no alternative to rolling up your sleeves and trying to understand yourself and the implications of the new dynamics in the industry,” Huang said.

The conversation ended with Narayen asking if the rumor that Huang has a tattoo of NVIDIA’s logo was true. Huang then told the story of how his colleagues challenged him to get a tattoo if NVIDIA’s stock ever hit $100.

“I’ll show you my tattoo. However, I think that Shantanu should get a tattoo, too,” Huang said to applause from the audience.

Then Huang, at Narayen’s prompting, took off his jacket and rolled up the sleeve of his shirt to show a tattoo of NVIDIA’s logo on his bicep.

“So Shantanu’s going to get a tattoo,” Huang said with a laugh.

For more, follow #AdobeSummit on your favorite social media platform.