KOBE, Japan, 3 November 2015 - From 2 to 5 November, the 8th edition of SIGGRAPH Asia will bring together more than 7,000 of the world's leading computer animation experts, researchers, technologists, graphics pioneers and trade visitors from close to 50 countries around the world. Both a conference and a trade exhibition, SIGGRAPH Asia is taking place in the vibrant and eclectic city of Kobe, Japan, at the Kobe Convention Center, to help further grow and foster strong connections with important communities in Asia. In addition to featuring crowd favorites such as the Art Gallery, Computer Animation Festival, Emerging Technologies and the Symposium on Mobile Graphics and Interactive Applications, this year's edition of SIGGRAPH Asia will also introduce two new programs for the first-time ever - the Symposium on Education and the Symposium on Visualization in High Performance Computing. Hundreds of industry experts and professionals are also expected to contribute to the strong line-up with a diverse range of demonstrations, courses, workshops, posters, technical briefs, and technical papers.

Leading the Keynote at SIGGRAPH Asia 2015 is Ronnie del Carmen, co-director of Inside Out, the Pixar film that has touched audiences worldwide and been ranked the tenth highest-grossing animated film of all time. Del Carmen has been a member of the story team that worked on a number of the studio's most famous feature films, including the Academy AwardÂ®-winning features Finding Nemo, Ratatouille and Up (on which he served as the story supervisor). His keynote today, From Story to Screen: Ronnie Del Carmen's Path to Pixar and A Peek Inside The Making of Inside Out, will cover stories of his career path from being an advertising art director in the Philippines to becoming a co-director at Pixar, while walking the audience through the intricacies of crafting an animated work of massive scale, scope and ambition.

Joining del Carmen is Satoshi Tadokoro, a project manager of the Japan Cabinet Office ImPACT Project, a research professor at Tohoku University, Japan and president of the International Rescue System Institute. In his closing keynote on 5 November, Tadokoro will discuss the use of robotic systems for disaster response and recovery, including its potential effectiveness and existing gaps.

A premier gathering of leading names
Featuring about 80 participating companies from Asia and beyond, the SIGGRAPH Asia 2015 Exhibition demonstrates the versatility of computer graphics today. Among the leading names that will be showcasing their latest works and innovations are Amazon Data Services, Christie Digital Systems, Digital Hollywood Japan, Forum8, Google, Intel Corporation, Isotropix, Khronos Group, Polygon Magic and PIXAR Animation Studios. Visitors will also gain a holistic view of the developments in hardware and software in computer graphics as well as services such as interactive technology and hardware device expertise from Animae Technologies and 3D graphic solutions by Born Digital, Inc.

The SIGGRAPH Asia 2015 exhibition will feature a Thailand Pavilion, organized by the Bangkok ACM SIGGRAPH, showcasing current content and research in CG and VFX, media and games from Thailand. In addition, the Kobe City government will be showcasing works from the Kansai region and Tokyo in a Kobe City Pavilion. 19 participating companies will be demonstrating their products and services and creating a knowledge sharing platform to connect with other businesses and individuals.

The exhibition floor will play host to 21 educational institutions which will be presenting their latest research and ideas that can potentially bring the industry forward. Japanese educational institutions, including Kansai University, Kobe Institute of Computing, Multi-plAtform Game Innovation Centre (MAGIC), NTU, Ritsumeikan University and Technology & Management Research Institute of KYOTO will display their work in creative media, including audio and film production, games technology and related research as well as animation. The Carnegie Mellon Entertainment Technology Center will also be exhibiting work by students from its two-year Master's Degree in Entertainment Technology program.

Reflective of the growing potential of the computer graphics market in the region, established players such as FLAME (Japan); FOVE.inc (Japan); Neun Farben (Philippines); OLM Digital, Inc. (Japan); and Polygon Magic (Japan) will be holding recruitment drives at the Job Fair on the SIGGRAPH Asia 2015 exhibition floor.

The 2015 Emerging Technologies program received a total of 78 submissions from Asia (Japan, Korea, China, Hong Kong, Taiwan, and Singapore) and beyond (Canada, Australia, USA, Italy, UK, Norway, Russia, and France), and 29 outstanding submissions were accepted by the Emerging Technologies Committee. The audience can expect highly sophisticated and impressive emerging technologies demonstrations that show a preview of what the future could look like.

Â· CalibraTable: Tabletop System to affect estimating food-volume by Sho Sakurai, Takuji Narumi, Yuki Ban, Tomohiro Tanikawa, Michitaka Hirose, The University of Tokyo (Japan) - In order to realize computer interaction technology to control over all valance of eating meals without the user's effort, they propose a tabletop system that affects estimating food volume interactively by projecting the virtual dish around food on the tabletop and controlling the size of the projected virtual dish.

A moving and deforming interactive digital table designed to dynamically customize users' workspaces. Unlike existing semi-fixed tables, the TransformTable allows users to keep their workspace efficient and comfortable in an effortless way through its self-actuated locomotion and shape transformation capabilities.

The Mikasa Digital Ball platform is a ball that enhances ball sports through the use of digital technology. It organizes dynamic ball interaction with real-time computer graphics and sound output using a rubber ball that incorporates a BLE wireless module, six sensors and one rechargeable LiPo battery. 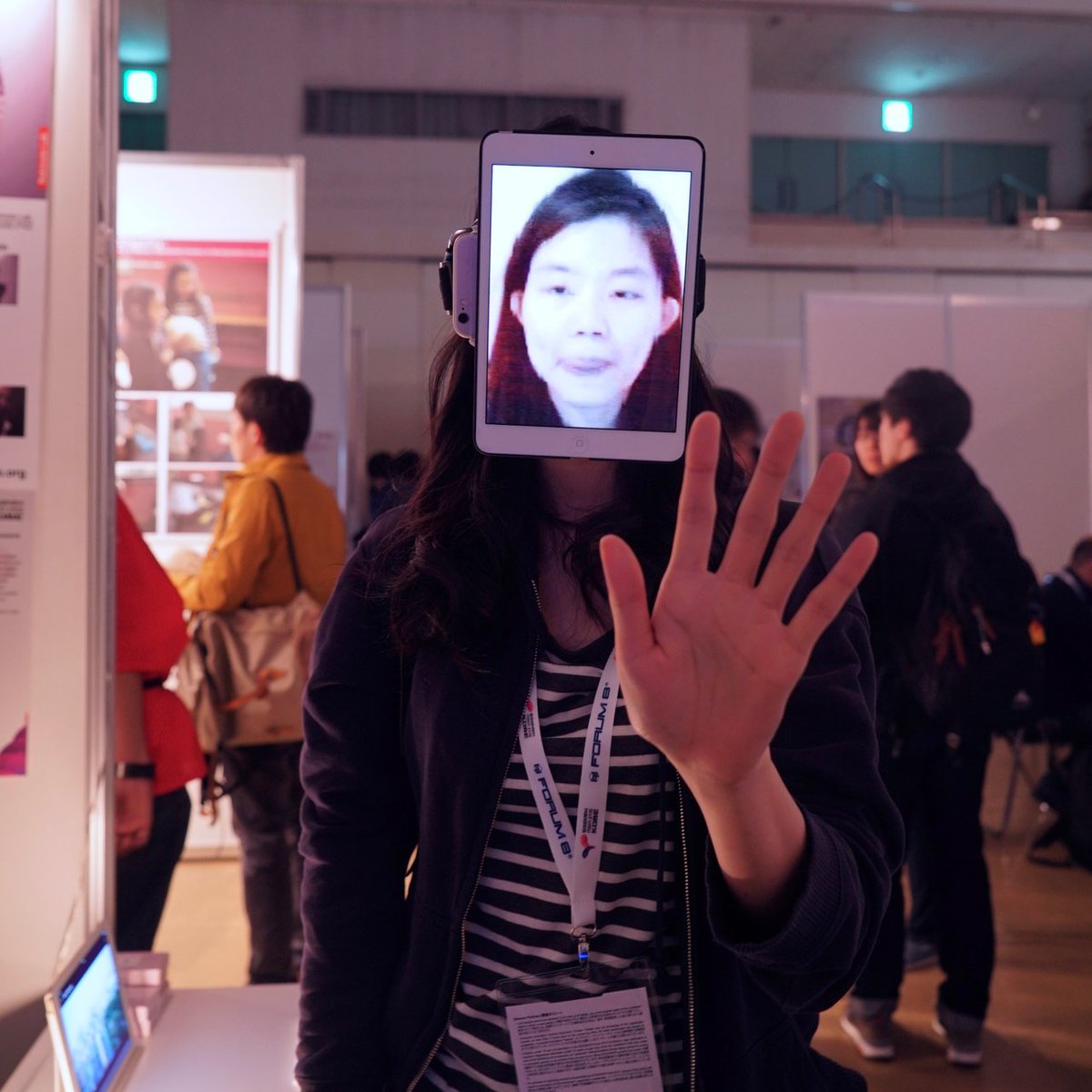 Recognizing high-quality, artistic and technical animation works
The Computer Animation Festival works span the multiple disciplines of visual effects, animation, research and development, games, advertising, and education. As one of the most popular programs at SIGGRAPH Asia, the annual Computer Animation Festival received 400 submissions from 36 countries this year, with films conceived and produced by students making up 51 percent of all submissions. A total of 50 films from around the world have been selected for the final screenings at the Electronic Theater and Animation Theater

Here is the list of the SIGGRAPH Asia 2015 Computer Animation Festival Award Winners:

In this unique and visually stunning piece, audiences are taken through the first person perspective of someone in an afternoon class. Follow him as the hits during the afternoon lessons, and as his head gets heavier and as he tries to stay alert.

Natural Attraction showcases a natural spectacle which turns a sparse, dry landscape into a fruitful place bearing new life. The interplay between sky and earth reminds of a sensual love act to express the dependency and perfect correlation of both elements.

Chase Me is a hybrid film exploring two worlds, stop-motion and CGI films. The project first began as a CG movie, which was then 3D printed frame by frame. Each second of the film is made up of 15 frames. Everything on the screen has been 3D printed, from the sets to the characters. Chase Me is made up of about 2500 printed parts.

True to its identity as Asia's premier computer animation festival, the Computer Animation Festival at SIGGRAPH Asia 2015 will also host a series of panels and talks by industry experts and pioneers who have worked on some of the latest animations to hit our screens.

Â· The technology behind Big Hero 6: Toby Jones and Rajesh Sharma from Walt Disney Animation Studios go behind the scenes of 3D computer-animated superhero comedy film Big Hero 6. Jones and Sharma will discuss some of the concepts and work that went behind the creation and animation of the characters, including Baymax, effects, crowds, lighting and rendering.

Â· Disney/Pixar's The Good Dinosaur: Sanjay Bakshi, Matt Webb, Sharon Callahan and Ana Lacaze from Pixar Animation Studios discuss the making of the latest Disney/Pixar release, The Good Dinosaur, including some of the technical challenges behind the making of the film. The panel will share with audiences the process of creating expansive and believable environments, illustrating the challenges of making 3D volumetric clouds, locations based on scanned elevation data, procedurally generating millions of trees and foliage and tying it all together with an integrated lighting solution.

Life on Earth?
The theme for Art Gallery this year explores the intersections of art and life and questions how art can improve current conditions of life on Earth to extend human experience. The SIGGRAPH Asia 2015 Art Gallery welcomed a myriad of proposals for art works and artistic installations that utilize digital technology, including visual and sound works, performances, audio visual installations, and most are collaborations across different fields of arts and sciences.

Art Gallery received 134 applications from all over the world, including Hong Kong, South Korea, Japan, the UK, Germany, France, Portugal, and the US. Of the 20 artworks selected for the exhibition, visitors can keep an eye out for:

A series of industrial road signs that depict humanity's struggle with morality and the human condition, including our experience of birth, childhood, love, marriage, parenting, social recognition, and death.

"SIGGRAPH Asia provides an opportunity for attendees to be presented with the possibilities that computer graphics and interactive techniques can offer. Celebrating the successes of pioneers, emerging artists, researchers and professionals in the field, this year's committee has worked hard to put together an exceptional line-up of pre-eminent works and pieces that we hope will inspire future breakthroughs in Asia and the world. With an increase in the number of high caliber contributions from all over the world, the return of interactive programs, such as the Art Gallery and Emerging Technologies, and a consistency in the programming to stay up-to-date on industry trends, I am confident that SIGGRAPH Asia will continue to be an important platform for the computer graphics and interactive techniques communities around the globe," said Jeff Jortner, President of ACM SIGGRAPH.